When I started growing tomatoes, I hoped to save a little money. I knew what I spent on tomatoes: $2.69 every two weeks for a plastic clamshell of six Romas at Aldi. So I should save about $5 a month for 1-2 months while we were harvesting. Perhaps a couple of bucks more for a few jars of salsa or pasta sauce. Since the plants themselves cost about that much, it wasn't going to be a big saving. But it was also a learning experience, of course. 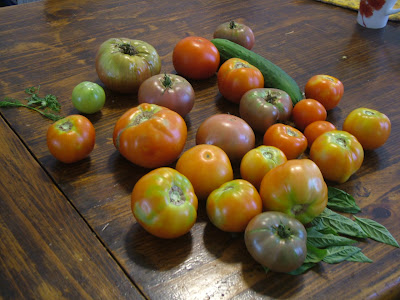 This is how many tomatoes have been ripening on our table for the past several weeks. As we eat some, we pick more. It turns out to be more than three per week.

I had forgotten my Rule Number One of Food Buying: Whenever you don't eat one thing, you're going to be eating something else. This rule gets invoked all the time when I cut something out of my grocery budget -- say, ice cream, pretzels, or white bread -- and find that I don't have enough to eat that week because I forgot to replace those calories with something else. It turns out the inverse is also true: when you're constantly eating tomatoes, you may find you eat fewer bananas, peanut butter sandwiches, and lettuce. With such an easy (and free) food to snack on all the time, you end up eating them all the time and saving money elsewhere. 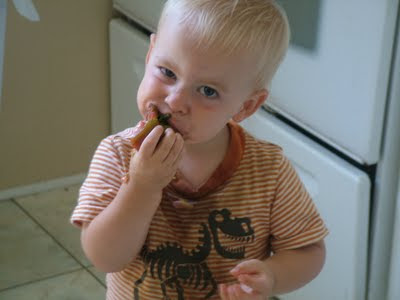 Use #1 for tomatoes is as a baby snack. Usually an outdoor snack, because he tends to spit out whatever part he doesn't like (mostly peels).

Use #3 is sandwiches. Today's was tomato, cucumber, mozzarella, basil, and a teeny bit of onion on bread spread very lightly with mayo. (Pesto is better, but I had none made.) 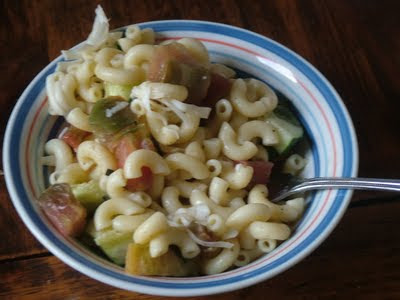 Use #6 is salsa and spaghetti sauce. I haven't really had any success with spaghetti sauce -- it tastes fine, but just isn't the texture I'm used to -- but the salsa is excellent. 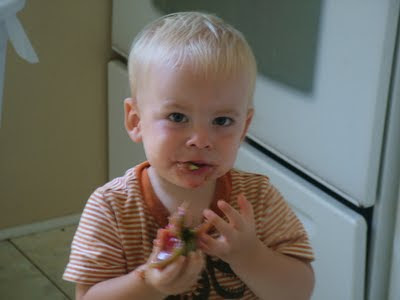 Marko approves. I have no idea how much money we are actually saving, but it's more than $5. My garden has officially paid for itself! Plus, we're eating a good bit healthier thanks to the displacement of other snacks.

Later I'll show you how the plants look now (which is kind of dreadful), but keep in mind, I've gotten at least 50 tomatoes off these plants. My only costs were four seedlings and one seed packet. Some tomato cages I found in the shed supplemented. I did not amend the soil at all beyond breaking it up. In fact, I spent very little effort on these little guys at all -- and they still rewarded me! Next year I'll do more, having learned more, but for now, it's nice to know that you can do everything "wrong" and still get some tomatoes.

Marko is looking so much older! What's your salsa recipe, if you don't mind sharing? We've got quite a few extra tomatoes here, too.

About three or four tomatoes, half an onion, one jalapeno, some cilantro, and at least a tablespoon of salt (this helps keep it from going bad as fast). I think that's it. I ran most everything through the food processor, but left some of the tomatoes roughly chopped so the salsa would be chunky. It made one reused salsa jar full.

I pulled some out of my fridge just a little while ago, and found it had mold on the top. Turns out the mold scrapes right off the top -- but I added more salt to keep that from happening.

A tiny bit of wine vinegar will also help it keep longer.