It's tough to be a woman nowadays. Oh, sure, women's rights of various kinds have expanded by leaps and bounds -- certainly we are not being locked in the kitchen or prevented from speaking or forced to wear burkas in America today. And yet, things are more confusing for women than they used to be.

On the one hand, many women want to pursue a high-powered career, and are quite pleased in their ability to do so. They can go to college, pursue whatever degree they want, get whatever job they want, climb through the company, and make a great deal of money.

Or, they could get married right out of high school, have kids right away, and stay home caring for those kids until they're grown. In their own homes, they can set the rules and have a huge degree of freedom.

However, these two options threaten one another. If some women drop out of the workforce when they have kids, working women are under the suspicion of untrustworthiness, just because of their gender. Employers wonder if their female employees will be getting married, having babies, resigning. They fear women will be demanding more leave, more flexibility, more breaks. Women who choose to put their careers first have to deal with the expectation that they will put their families first.

Some people get offended hearing the statement, "Moms who stay home to raise their kids are undermining what we feminists worked for," but I honestly understand. It does mess things up when some of us stay home. It changes the expectation. It's also a reason for the wage gap.

Meanwhile, stay-at-home moms are threatened by working women as well. If most women work, the economy begins to require two incomes in a family. There's no leeway for them to stay home. Some moms are forced back to work before they want to go. Others have to cut expenditures down to almost nothing in order to afford to stay home. And they face a penalty if they want to return to the workforce, a blank spot on a resume. This wasn't the case when women were expected to stay home.

So, we've got a problem. A true feminist would agree that freedom for women means the freedom to choose either of these options. And yet, how can we have complete freedom to go either way, when we're all fighting the expectation that we'd be doing something different?

A childless career woman has to face people making assumptions about her commitment based on other women, women who quit or reduce hours when their children are born. She will often have to shoulder more work in order to keep up productivity during their maternity leaves. A stay-at-home mom has to deal with the assumptions people make that she is lazy, that she just sits around the house all day, that she is uneducated. When people ask her what she does for a living -- which is how most adults define themselves -- she is left feeling vaguely embarrassed for her lack of an answer. And working moms feel the most torn of all, wishing for more hours in the day so that they can work, care for their children, and maybe find five minutes for themselves in the midst of it all.

Other ages have not had this problem. One hundred years ago, there was an assumption that married women would stay home and take care of the house and children. Sometimes this was a big job and sometimes it wasn't. But before that, before the industrial revolution made it commonplace for people to have "jobs" per se, rather than other work (on farms or in workshops), women definitely worked. They would work in and around the home at handwashing clothes, cooking, food preparation, clothesmaking, and countless other tasks. Meanwhile the man of the house was working a little further afield, hunting or farming, but still working for his own family. In this sense, they both could be said to "stay home."

And what about the kids? The children went where their parents went. Babies stayed with their mother, on her back or in a nearby cradle while she worked. Older children might go into the fields or the workshop to watch their father, and the oldest would begin to learn his work. Children weren't separated from real life, they were part of it, taking on a gradually increasing role with age. This was good for the children as well as for their parents.

Unfortunately, there's a problem of place nowadays. Work is done in one place, a quiet office or dangerous factory, and childcare is done somewhere else, at home or in a daycare. And it's no longer done for the family itself, on its terms. There's now a boss who feels it inappropriate for his secretary to strap her baby on her back before going to work like women have done throughout history. There are rules and regulations. There are coworkers who have gotten used to their adults-only space.

Because of all this, women aren't being allowed to combine their two jobs. I think this is a problem. I think, as much as possible, this should change.

I know bringing babies to work is not a total solution. There are many jobs where it wouldn't work at all. But it would be a start.

When childraising stops being considered a privilege, a disability, a demand, and is considered just something women do, something essential to what women are, something we can bring with us anywhere as we bring our breathing, maybe this dilemma will begin to fade away. When employers realize that men who use the restroom and take smoking breaks lose productivity, and unmarried women who space out at their desk for five minutes lose productivity, and mothers with babies lose productivity, but not enough that it can't be made up by hard work, maybe we'll be getting somewhere. When society acknowledges that the raising of our next generation is important work, work that has to be done by someone, work that will harm all of us if it isn't done well, perhaps everyone will start trying to be part of the solution, shuffling things around so that parents can parent. When people recognize (as, in my case, they do) that inviting me somewhere means inviting my baby, I won't feel that I am being forced to choose between work society considers valuable, and work I consider valuable.

It's a dream of mine, one that I have been able to pursue as I bring my baby to work, thus making me one of a very small minority of mothers who do not feel torn about the way they spend their time. I only wish more of us had that option. 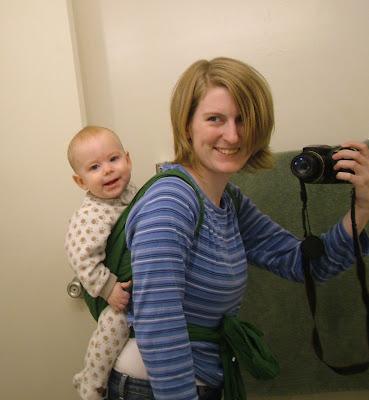 This is a fantastic blog. I shared it with our Parenting in the Workplace Institute Facebook followers this morning. We help businesses to set up babies-at-work programs--and I couldn't agree with you more about how much better off society would be if parenting-at-work expands.

Great post and fantastic insights. I completely agree about the problem of place and that expectations and prejudgments need to change about parenting being some sort of deviancy to our job-centered society when it really shouldn't and doesn't need to be. Thank you for writing this. I hope that if I'm ever in the situation of having to choose or forge my own path, I'll be surrounded by people and environments as accommodating as yours.

On another note, I don't think that the fact that some moms choose to stay at home is at fault for the wage gap. Rather, I think it's used as an excuse for the wage gap by people who refuse to see women as anything more than a skirt to chase or temporary workers who will eventually revert to biological type as a breeding machine. A bit cynical, I guess.

I don't think it's the moms staying home per se, but it is, in part, the *expectation* that they will stay home, take leaves, cut hours, etc. Which I can hardly blame them for, since it's something I did! Men can generally be counted on to stay in the workforce, because they have to. Women don't always stay in the workforce. I think that's a good thing, but it does influence people's assumptions about what kind of workers women are.

I can hardly blame people for thinking women will "revert to biological type" when it's exactly what I have done. In other words, it's a problem that is not 100% the fault of men. I'm sure they could do better about judging women as individuals, but we all do tend to make generalizations before we know someone.

You two are absolutely gorgeous together.
Love,
Mom

The problem with combining work with childcare, nowadays, is that you're working for someone else. In the pre-industrial family, and with the modern-day SAHM, the woman is constantly amending priorities, and trading off between the demands of the children, and importance of the work. She can choose to be less productive with making clothes for the family, or the churning of butter to sell, or whatever, because of the immediate need of someone to be fed, or cuddled after a fall, or whatever.

In a modern workplace, you'd be trading off between your child's needs, and someone else's priorities. You're not in sufficient control to make the necessary balance.

The only viable solution, I suspect, is in entrepreneurial approaches to income generation, WAHMs and the like.

Ruth, you bring up an important point. I'm lucky in having employers who expect me to put my son first and are willing to work around what he needs. Not all employers are like that.

Working at home and self-employment are great solutions. For many jobs, there's absolutely no reason not to make telecommuting available. And I have a ton of reasons to love small businesses. People just work better and happier working for themselves. And so great for the kids.

This is a great post! I never really thought about the way both working mothers and stay-at-home mothers (who also do a lot of work!) end up undermining each other--without even meaning to.

Well, I have felt a bit of (fake) nostalgia for the days when women were expected to resign from work after marriage. There are many jobs I know I'd be good at but don't get hired for because I can never see myself with a company for ten or more years and can't lie worth anything during interviews. But I guess that's okay. They're looking for loyal employees at the end of the day, and I can't really promise that, can I?

Still, I do see this as another inability to think outside the box that must have frustrated many women who had to fight to be taken seriously as long-term employees. Not that we should get extra special treatment (especially when we seem to be demanding enough as it is!), but I truly wonder what form a happy (happier?) medium would take.