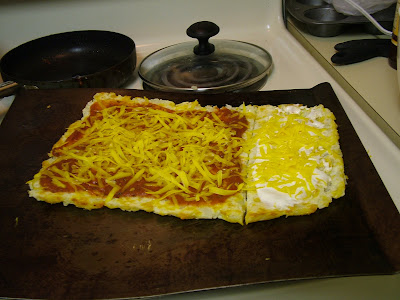 I have been field-testing some different grain-free pizza crusts lately, since John's biggest grain craving is pizza. He seriously loves the stuff, but even gluten-free pizza crust made him really sick. So I've been experimenting a bit. Zucchini pizza was okay. It varies quite a bit depending on how dry you drain the zucchini, and even at its best it reminds me of an omelet, but it did allow you to shovel pizza into your mouth with relative ease.

This time I decided to try potato pizza. I invented the recipe myself. Potatoes aren't allowed on the "primal" diet, but John and I eat potatoes all the time, because they're an inexpensive non-grain option that helps supply our very high calorie needs.

I definitely preferred this pizza to the zucchini pizza. It made a thicker, more substantial crust, and tasted less eggy. You can adjust it to your needs: more eggs for more strength, more cheese for more crispiness, more potatoes for a thicker crust. It does taste a bit like potato, but I happen to like potato as a pizza topping anyway.

John gave his vote of approval, so I think I'll be making it again!

Cook the potatoes, either by boiling whole or by baking. Let cool and peel the skins off. Mash the potatoes by smooshing with a fork or passing through a ricer so that there are no chunks or lumps (or as few as possible). Add the cheese. Beat the egg whites until they form soft peaks and fold them into the potato mixture.

Spread onto a baking mat or parchment paper and form into the desired shape. Press as flat as you want it, making sure there are no gaps. Bake at 350 degrees for 15 minutes or until firm. You can remove the crust from the parchment paper at this point, if you want it to brown better. Then add toppings (you may want to go easy on the cheese because there's so much in the crust) and bake till the cheese is melted and toppings are warm. Let cool a little bit -- it firms up as it cools -- and enjoy!

*It would probably work fine if you used a whole egg and didn't beat it, but I use my yolks for so many other things that it was a saving just to use the whites.

This post is included in Fight Back Friday with Food Renegade. I forgot to say that earlier ... there are tons of great posts about real food, so go have a look!
Posted by Sheila at 5:38 PM

What a neat idea. I've also tried a lot of alternative crusts -- from flax seeds to cauliflower. They were okay but all had their downsides. This one looks easy and good!

Thanks for sharing,
~KristenM
(AKA Food Renegade)

Yeah...a GF crust without weird non food ingredients like xanthum gum. I'm going to have to try this!