Things have been a lot better since I last posted. The kids are doing proper schoolwork now; not a lot, but some. John is doing some amount of work at home--answering the phones, handling library questions by live chat. I'm used to the ongoing drumbeat of tragedy now. It only makes me anxious once in a while. Other times I can go look at the death tally and it's like I'm reading it in a history book from a long time ago. It's so bad I can't quite imagine; my mind just recites the numbers and feels nothing.

It does make me angry seeing people still minimize it. COVID-19 kills more people in the US every day than any other condition. It's killed more than six times as many people as 9/11. And there are still people saying it's overblown. I guess it's hard to change your mind and admit you didn't predict this.

My energy level seems to have dwindled to fit the amount there is to do. I don't have work to do or school to get people ready for, yet I still don't manage to get the chores done. Plus it feels kind of pointless to get the house clean when we're clearly not going to be having any company. The mess got to me a couple days ago and I vacuumed. But it's back to looking medium sloppy.

In general, I like staying home. The yard is blooming; our cul-de-sac is full of pink trees. Most days it's been nice enough to play outside, and I've planted some things. I've had time to do some more crafting than I have in a while. I even bought a huge loom and made a scarf. (My small loom got left at work, with the kids' project on it. I hope we can finish it someday....) 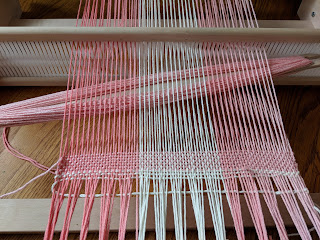 Jackie has been nightweaned at last. Some nights she sleeps through, and it's so wonderful. Other nights, she wakes up at 4 am and goes crazy and punches and screams. Nothing calms her down. I get very tempted to just nurse her, but I would hate to go back now. I lost quite a lot of sleep the first few nights after I quit nursing her. The first night, she woke up at 4 am and didn't go back to sleep at all.

Some days, she's very chill about hanging out with the big kids. It's like Christmas to her to have them around all the time. Other days she just isn't happy and trades off climbing on me and climbing on John. Which is still an improvement from having her climbing on only me all the time! 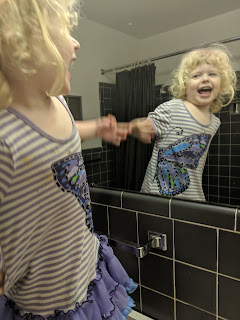 I've had more time to spend on each kid individually, which is really nice. Marko seems to be flourishing in particular, because I've poured some extra attention on him. He still gets flustered by all the work he has to do, and isn't quite doing it all, but given the reason I put him in school was mainly that I couldn't get him to do any work, I'd say we're doing okay. Michael has learned to spin and sew. He really loves making things. Miriam has done a lot of chores. She's the only kid who really connects chores done with screen time earned and dedicates herself to making it happen.

I finally got unstuck on my novel and finished the first draft. It was harder to finish than anything I've written in years, but now it's there on the page for me to start perfecting. I think it's pretty good already, but there's a lot that needs to be fixed. I've made myself a firm promise not to query it till my birthday at least. Because I know, from past experience, that some of the corrections that need to be made don't appear till you've left it aside for quite a while.

I went to the store today. I hoped to stock up more so we didn't have to go so often, but the stores can't handle everyone stocking up. At first the shelves were scarily bare. Now everything has limits: 2 loaves of each kind of bread; 1 pack of toilet paper; 6 gallons of milk; 4 cans of tuna; 2 cans of beans. The first time they told me I couldn't buy eight loaves to last us the two weeks, I tried to argue with the poor cashier that I have too many kids to live off two loaves for very long. Then I felt horrible for arguing with the poor guy, who didn't make the rules, and I started to cry. I wanted to cover my face but I couldn't, because of germs. That's probably going to be one of my big memories from all this. This time, I paid closer attention to the limits. The only one I missed was tuna; I accidentally tried to buy six. And when the cashier told me I'd messed up, I chirped, "Oh, sorry!" and moved on with unloading my cart. We're all doing our best here. Him, me, every other person there getting what they need. 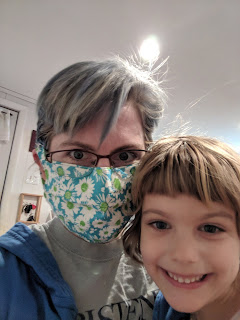 Today was my first time wearing a mask, and I was pretty self-conscious. But almost everyone else was wearing them too. I heard a couple of people ask each other, "Do I know you? I can't see enough of you to be sure!" People actually kept six feet apart this time. There was hand sanitizer at the entrance and exit. I feel like everyone is taking it seriously and doing their best, which I didn't feel two weeks ago.

Several friends are out of work or soon going to be. Friends with their own businesses are worried about making payroll or shutting down. It's really hard on people everywhere, and no end in sight. I was distressed to hear that the virus' death rate is disproportionately high among everyone who's already less privileged. It just feels horrible that poverty and racism not only still exist, but that they intensify the awfulness we're already going through.

Lots of other things are horrible right now, too. Domestic violence is worse, of course, where neither wives nor children can escape even for a school or work day. Special needs kids are getting no services. Parents who were barely coping are now not coping. Seniors are lonely and depressed. An autistic girl committed suicide the other day in England, because there's nothing that destroys an autistic person's ability to cope like completely shattering all the routines that work for them.

Some countries are handling this better than others. The US seems to be one of the worst. We're not fighting the virus well, and we're not cushioning the shock to workers either. Online, I see people from other countries worrying about us, pitying us. Those poor Americans. Tomorrow our death toll is expected to pass Italy's for the highest in the world.

The Democratic primary is basically over and the candidate I liked the least has won. So now we've got a race ahead of one sexual predator against another sexual predator. Not the choice I would have liked to have to make. But when do we ever get to choose the greater of two goods? That seems too stupidly optimistic for 2020. I should have guessed. Meanwhile Elizabeth Warren keeps having great ideas and then the people in charge keep not doing any of that.

That stuff is all pretty heavy. And yet, like I said, I feel okay most days. Some days it feels like my chest has gone all hollow, and I want to curl around this world-sorrow and cry. And then later on it's gone, and all I can see is that the sky is blue and my children are laughing. It's as well sometimes that I can't see past the edge of our yard: I can't encompass the world's grief every moment. Sometimes it's the best thing to focus on the fact that I, myself, am all right, that my family is all right, that so far no one I am close to is sick.
Posted by Sheila at 10:48 PM