This year Miriam is starting school.  Can you believe it?  She's in kindergarten this year.  She has the same teacher Michael had, which worried me because Michael spent the whole year complaining about how boring it was and how much work there was.

Well, Miriam loves it and comes home every day raving about how wonderful every moment is.  The teachers all say she's a delight.  Which I could have told them. 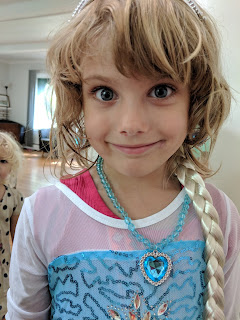 She's not so much of a delight at home lately, though.  There's been a lot of whining and melting down--really for the past six months, so I'm not going to blame school particularly.  But I wouldn't be surprised if she was very tired after all that good behavior at school.

Marko continues to love school.  Michael continues to whine, but I think he's having a better year than last year.  Like, if I ask, he says school is boring, but he doesn't volunteer many complaints.

I said, dude, I walked you to your room EVERY day of kindergarten.  It was well out of my way (because to get to the door parents can sign in at means going the whole way around the building) but I did it because you seemed to need it, and because I love you.  So you owe me one year of walking your sister to hers.  It's not even far from yours.  You can do it.

He hasn't complained anymore so I think he's learned to live with it. 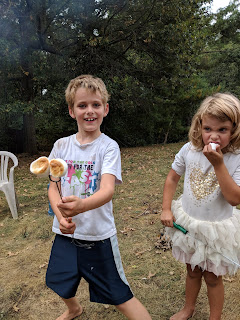 Big news for me this year: I got a job teaching Latin two days a week.  I have a beginning Latin class of 10-12 year olds, a fun introduction to Latin for 6-8 year olds, and fifteen minutes to somehow entertain preschoolers with Latin.  Only the serious Latin class is easy for me.  Trying to figure out how to keep the attention of the younger kids while teaching them a whole foreign language is a lot harder.

The school is exactly the kind of low-budget startup Catholic school I always teach at.  It's a little uncomfortable knowing that they're all Catholic and I'm not (though they know I'm not).  Just being back in that environment is strange.  But at the same time, it's familiar and I know how to deal with it.

I was hoping it would be a fun break from being with Jackie all day.  So far I find myself sighing with relief when I wake up and it's not a teaching day.  It adds stress rather than removes it.  But on the other hand, it's early days yet and I know I'll hit my stride better later.  And it is nice knowing I'm doing something I'm good at, and that people are willing to pay me for.

While I'm doing that, Jackie is having her first experience with daycare.  I dreamed of sending her to one of the fancy school-like ones, but they all want fulltime kids.  So I found a little home daycare and it's actually much better for her.  She hates large numbers of kids, and this is only three other kids.

Her social anxiety at this age reminds me a lot of Marko's.  She hates when we have friends over and is always trying to drag me out of the room.  With Marko, I let him avoid social experiences for the most part.  My thought with Jackie is that carefully introducing her to social interaction in small doses might help her ease into it a little better.  That's part of why I'm going to all this trouble instead of just staying home with her all day.

The first day, she cried the entire time.  The second day, she cried most of the time and then fell asleep on the floor.  My heart broke but it was a bit late to back out, so we kept trying.  I told the daycare lady it was fine for her to watch as much TV as she wanted, and not to try to talk to her or engage just yet.  And slowly she's been getting more and more comfortable.  Yesterday she didn't cry at all!  She watched an episode of My Little Pony and then sorted pom-poms next to another kid.  Not interacting or anything, but she was two feet away and not screaming and that's PROGRESS.

I worry about Jackie.  She's so sensitive to so many things.  Honestly, I've worried about her since she was born, and I don't know how much of that is just the anxiety I was dealing with at the time.  But she was slow to make eye contact (I think five weeks) and smile (like eight weeks).  She gave me her first hug at about 13 months.  She had no words at 18 months.  And, I mean, there's all the screaming. 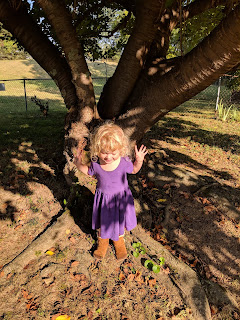 But on the other hand, she is extremely articulate now.  She can say basically whatever she wants, and it's not just parroting like Marko did at first.  She tells me she loves me many times a day and hugs me and kisses my leg.  (She doesn't like kissing faces.)  She mostly hates strangers but on rare days, when she's very comfortable, she'll go right up to someone and start talking a blue streak (which the person can't understand).  She spends a lot less time screaming since I downloaded some games on my tablet and let her play it.  Whenever she's upset, she wants the tablet and at this point I just let her have it, because it beats nursing.  A little bit of that calms her down and she's ready to get back to life.  No more hours-long meltdowns -- or almost none.  She still will if she's tired.

She doesn't really play independently.  I blame being the youngest.  She's just never had to entertain herself before.  So while the big kids are at school, she wants my attention all the time.  And suddenly, when they're not there, she has to dictate very complicated processes to do anything.  I want to leave the house?  Oh, well that's gonna take an hour while she picks out the right shoes, the right clothes, whoops different clothes, stuff for a bag she's going to bring, and a stuffy.  Then she's going to want to get in the car BY HERSELF, by the opposite door to her seat, and buckle in the stuffy WITHOUT HELP, and swing on the pilot seats for awhile, and play with the vent.  And if I deviate from her demands (which vary every time) she'll pitch a fit.  She's getting a little better about this; I wonder if it was just the novelty of being without the big kids and getting to decide more things.

She never wants to go anywhere.  The first couple of weeks of school, she kept asking to go places, but suddenly (after teaching and daycare started) she just wants to be at home.  I feel that: we're busy and being at home is restful.  But we do sometimes have to go shopping, and the library is supposed to be fun.  But she'd rather watch the same episode of Chip and Potato seventy billion times.

She still nurses many times a day and goes bananas if I don't let her.  While she nurses, she picks intently at my belly button.  She honestly seems more interested in the belly button than the milk.  When she's mad, she bends over backward like she's doing yoga, or she rips out handfuls of her own hair.  She refuses to play in the back yard if the neighbor's A/C unit is making noise.  She finally eats food with some regularity, but if she's in a mood she won't touch anything.

Anyway, what all this is coming down to is me wondering whether I should try to get her assessed for autism.  She is a lot like Marko was in some ways.  But according to the screening charts she's pretty much fine.  She engages; she makes eye contact; she points; she follows directions (when she wants to).  And I do remember worrying to a mental health professional that I had failed Marko by not getting him assessed sooner, and she said not to feel bad, because Marko's struggles wouldn't have been apparent any younger.  He doesn't have the kind of challenges (with speech, for instance) that present at two.

So I'm holding off for now, waiting to see how she does with daycare and how many of her issues are just two-year-old things.  But I think after three, the school district will assess her for free, and she can get into the head start preschool if they think she qualifies.  So that might be a good time to at least look into it.

As part of this new "me doing adult things without Jackie" phase, I finally went to the doctor about my frequent fatigue and dizziness.  And this time she actually took me seriously!  She told me we'll keep doing tests till we find out what it is.

Well, three tests later, I'm exhausted of this nonsense and would like to just give up and deal with it.  It's not anemia.  It's not thyroid.  It's not POTS.  It's not anything with my heart or lungs.

Tests cost a lot of money and can be a big hassle.  For the tilt-table test, I had to skip breakfast and drive all the way to [large town] by seven in the morning, while John missed an entire day of work in order to get the kids off to school without me.  (Once he misses his bus it becomes impractical for him to go in at all.)  Then I have this stupid heart monitor I have to wear for two weeks.  I hate having things on me.  And Jackie pulls on the wires and unsticks the stickers.

Next time I see the doctor, I'm going to say: is there anything we haven't ruled out that is actually dangerous?  Am I gonna die?  No?  Well then GOODBYE I'm going to just BE DIZZY because it's less trouble than testing all the dadgum things that could possibly go wrong in the human body.

I'm almost done querying my science fiction novel from last year.  It really hurts.  I don't know if the novel's not good enough, or if my real problem is I started too soon.  Because several months in, I came up with some great edits, adding a whole other point of view, and I really wish I could give that version to the agents who requested the full manuscript earlier in the year.  Alas.  You get only so many chances.  And it seems that the best ideas for editing only come after you've read half a dozen rejections.

I'm a little stuck right now on what to do next.  I wrote myself into a corner on my space colony story, and taking the entire summer off didn't help.  But I really want to finish it, because it started so strong and the characters are so good.  I feel like I owe it to them to pay off all the stuff I set up.

On the other hand, I have a cool new idea that I really want to run with.  It could be my National Novel Writing Month project . . . if I finish the other one first.  And with all the stress in my life I just don't know if I can do that.  So then what do I do?  Finish the one, or start the other?  TOO MANY IDEAS!


How are you this fall?