Enriched dough and the things it makes

The other day I got a compliment from a friend on my chocolate rolls.  Of course I was very chuffed.  (My feelings on baking have to be expressed in British-isms, because of British Baking Show.)  So I thought I'd share the recipe for the dough, plus a few of the different things I've made out of the same dough.


Simple bread dough is just flour, water, salt, and yeast.  That makes a nice fluffy bread, but when you want sweet rolls, you add different ingredients to enrich the dough: butter, milk, eggs, and/or sugar.  That makes a very soft bread that doesn't form a hard crust on the outside, and pairs well with toppings like cinnamon or chocolate.  Here's my recipe:

Mix together everything but the flour.  I like to warm up the milk and melt the butter before adding them, but it's important not to get it so hot it kills the yeast.  Just warm is fine.  That'll speed up the rise a bit.

Add in three cups of flour and mix it well.  This probably won't be enough flour, so keep adding more as you mix -- probably with your hands at this point.  Once it's come together as a big lump of dough, turn it out on a floured counter and start to knead.  Keep sprinkling flour if it's still very sticky.  Knead about eight minutes or until it feels smooth and only a little bit sticky.

Enriched dough can rise a little slower than plain dough.  Cover it tightly and leave it in a warm place for at least an hour.  An hour and a half is better, unless it's already rising out of the bowl before then.  At this point you can refrigerate it, tightly covered, if you're not going to bake it today.  Otherwise, shape into whatever shape you want and leave for half an hour.  Preheat the oven to 350 and pop it in.  How long to bake it depends on the shape, but it should be golden brown on top and not squishy on the sides.  Rolls will be done within 20 minutes, but a loaf will be a good bit longer.


So what do I make out of it?  Donuts are a big hit -- just fry instead of baking.  Cinnamon rolls are good -- roll it out into a rectangle, spread butter and sugar inside, roll it up, and slice into individual rolls.  You can also do the same thing with other fillings, like jam or Nutella.  Couronne, babka, and kolache can be made with the same dough.

What I'm making today is a very easy kind of stuffed bread.  You just roll out the dough in a rectangle, spread filling in the middle, and fold in the sides.  You do need to cut some slashes in the top so that steam can escape.  I've used a variety of fillings from sliced apples to pie filling.  Today I'm doing cream cheese and cherry pie filling, because I'm a lily-gilder apparently. 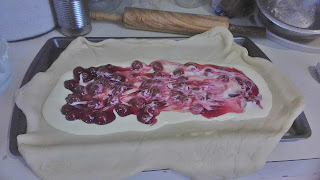 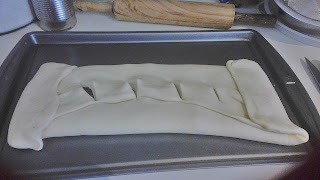 ...let it rise, and bake for forty minutes or so. 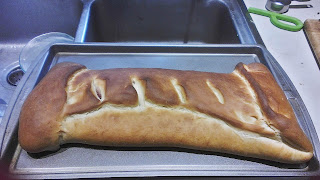 Be sure to cool it down before you slice it, or the fillings will all spill out! 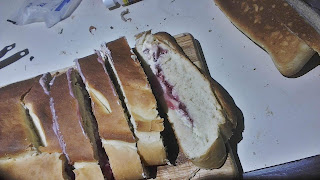 If you try my recipe, I'd love to hear what you make and how it works for you!

I'm going to have to bookmark this for fall. I keep thinking I should bake something but the thought of turning on the oven is just too much.