I've been thinking lately about how the emotions of disgust, horror, and fear lead people to reject conventional medicine and sometimes to turn to alternative cures.

All humans have a disgust reaction.  It keeps us from pooping where we eat, among other things.  But I've noticed there's a wide variety in the things people feel disgusted by.  These can be personal or mediated by our culture.  For instance, people in my culture are generally disgusted by the thought of eating bugs, because we don't eat them.  However, people in my culture usually are fine with the thought of eating clams or shrimp, while I can't make myself put those things in my mouth.

Disgust goes beyond eating, though.  Feelings of disgust may underlie some of our moral choices, such as sexual rules.  There may be reasons why we think incest is wrong, but those reasons are strongly reinforced by a feeling of, "incest, ick, that's just wrong."

For me, the thing I have the strongest disgust reaction to is what I've heard called "body horror."  You know, blood, guts, and gore.  But violent injury is not as disgusting to me as medical scenes - like that scene in House where they trepan a lady's skull with a rock drill.  *shudder*  The thought of the body out of place or invaded, or foreign substances inside the body, makes my skin crawl.  It's the worst.

I don't think this stems from any particular trauma; I had very little contact with doctors as a child since I was in excellent health.  But I have always hated having to take medicine ... the thought of the foreign substance inside my body, changing it, switching functions off and on ... brr!  I have slowly, with effort, gotten used to ibuprofen, but cough medicine still requires a little pep talk.  Needles are worse.  But, given the choice, I'd rather have blood drawn than anything injected.  If you get blood drawn, the second the needle is pulled out the horror is gone, but when you get a shot, that foreign substance is still inside you.  I get all kinds of psychosomatic reactions to shots; I always feel like I am going to get sick from them, though I never have. 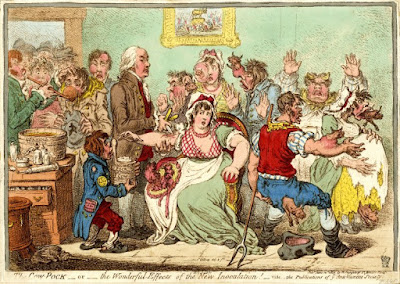 Anyway, I can say, with the wisdom of hindsight, that a lot of why I didn't want to get vaccines for my kids stemmed from this emotional reaction.  Shots are scary and feel dangerous to me, so why would I get them for my kids?  And any book or article that confirmed that they were scary and dangerous felt very believable to me.

So why, after all this fear and disgust of doctors, would people turn to alternative providers?  Well, I think alternative providers are well aware of who they're dealing with, and so they're very careful to avoid provoking the same reaction.  Look, it's just a plant!  So basically it's like drinking tea or eating salad.  Look, you don't even have to eat this one, just diffuse it in the air or rub it on the skin!  See, I'll just give you a special massage and your own body will heal itself!

But sometimes, these providers play with that reaction in a way that's more sinister.  What is grosser than having to take medicine?  Parasites.  And that's why so many of these weird made-up diseases that alternative providers claim to treat are parasitic -- worms, tick-born diseases, fungal overgrowth.  Stuff that's so icky that people will take literally any medication -- turpentine, bleach, IV antibiotics -- to get rid of it.  I struggled even to study parasitic diseases in middle school because they're so gross, and I would always feel like I was getting symptoms of them.  There can be no actual evidence that the person has any parasites, but as long as they're thinking of parasites, they feel awful and want someone to treat them.  And that's my theory as to why people who believe in chronic Lyme often claim to have any number of other tick-born diseases.  If you rule out Lyme, why would your next idea be a more rare illness also transmitted by ticks?  The answer is, ticks are super gross.  I have been scared of ticks long before I found out about Lyme disease because they are horrifying.  It's easy to convince people they are basically biological time-bombs waiting to go off.  And if it has the side effect of making parents paranoid about ever letting their children play outside . . . who cares?  The quack still gets paid.

Medicine is a really difficult field, in part, because of all this subjectivity.  If you feel like you're sick, you can convince yourself you're sick.  If you think you're taking a cure, suddenly you stop noticing your symptoms.  And, of course, people spontaneously fall sick and get well all the time.  I've been reading about medical history lately, and it's just fascinating how many crazy cures people strongly believed in -- because they had tried them and the person had gotten better.  Only in the past 200 years ago have we really gotten serious about controlling those results by seeing if people get well more or less often on their own or with the treatment.  Without that, it really is a mess.  I remember thinking for months that Marko had food sensitivities because of his random screaming and refusing to nurse.  I cut out basically everything and it seemed to help ... or else he grew out of that stage.  Who can say?  I eventually added everything back in and he was fine.  And then like a year later he had night terrors and I tried doing it all over.  But after awhile I decided that I'd never be able to sort out the different foods it could be when the behaviors I had an issue with were intermittent anyway.

Alternative medicine throws out the whole model of control groups and random studies and instead says: just try the thing and see if you get better.  If you do, that proves it works!  They're basically working on all our biases and inability to generalize, as well as our fear and disgust of medical procedures, so that we'll buy their products.

It's funny that I should turn from being so crunchy to writing posts against alternative medicine, but I just get mad realizing how easily manipulated I was.  I really needed to believe that only what is natural is good, that my body could heal itself of anything, that if I ate right I'd never be sick.  My one salvation was that I was too cheap to buy any of the expensive cure-alls.  I stuck to elimination diets and fermented vegetables (which I still believe in, though they probably won't cure cancer) and never going to the doctor.  There are worse things.  Some people spend fortunes on natural treatments.  Some develop such food anxiety that they pour every ounce of their energy on making sure no white flour passes their children's lips.  Some miss serious illnesses because they won't see a real doctor for them.  And some have serious reactions to the supposedly "safe" medicines they've taken.  And that really upsets me.  It's taken thousands of years for medicine to get to the state where it finally does more good than harm, and people want to throw it away and go back to the good old days where one in three children died before five.

What should be done?  Well, I could certainly wish that mainstream doctors were more considerate of people's feelings.  I often feel that they find patients' emotions a burden they don't want to deal with.  Maybe it has something to do with med school being so grueling that it weeds out patient, empathetic people early on.  Or maybe they just have to see too many patients a day.  Doctors should take the time to explain risks and benefits of everything, and make sure the patient feels like the agent of his care rather than having it forced on him.  I also think people should be better educated about biology, so that kids graduate from high school knowing how to read a study and differentiate a high-quality study from one that isn't.  Everyone should be taught in school about the history of medicine -- how common diseases were before we found out how to cure them, and how we managed to prove the germ theory of disease.  (Even today there are people insisting it's "just a theory.")

And for me, I have learned to accept that my reaction of horror to a treatment tells me nothing about whether that treatment is any good for me.  Luckily my kids don't seem to feel the same.  They're scared of shots, but when the shot is over, they like to think of their cells making antibodies to fight germs.  I'm glad they haven't got my hangups.  For me, it's all I can do to drag myself to the doctor more often than never.
Posted by Sheila at 2:22 PM

Email ThisBlogThis!Share to TwitterShare to FacebookShare to Pinterest
Labels: Health