All I want is to be able to turn lead into gold.  Culinarily speaking, that is.  I want to be able to pick up the same basic staples from the store -- ground beef, chicken thighs, potatoes, rice -- and somehow magically have something totally different and interesting for dinner every night.  But it has to be ready in 30 minutes or less. 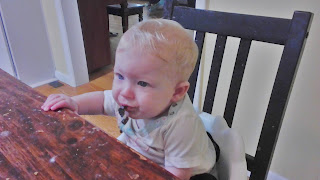 I might even be able to do that, too, if it weren't for all these troublesome restrictions.  For instance, dinners in our family are gluten-free, because John is home for those and I want him to have something he can eat without relying on pitiful substitutes (i.e. no burgers in buns for everyone else and plain burger on a plate for him).  Marko and Michael now both dislike chicken, though they will accept chicken breasts because they don't have "gristly bits."  Marko also hates pork of all kinds except sausage.  John and Michael both hate spicy foods, and Marko hates soy sauce.  Oh and Marko also hates pretty nearly all vegetables, so even if the meal is otherwise perfect there is always a bit of fuss over the vegetables.

So here are a few meals I've made lately that made everyone happy:

I looked online for something by that name and they all had noodles or biscuit dough or something.  So I made up my own thing, and it goes like this: a layer of potatoes.  Cooked ground beef.  Cheese.  Rings of onion.  Tomatoes (sliced would be better, but I used diced canned.)  Pickles.  Ketchup and mustard squiggled around.  Another layer of potatoes, and some more cheese.  I put that in the oven for 20 minutes or so and it was pretty good.

The usual way to do it is to put some chili (or similar meat & bean mix: I usually just throw in cooked ground beef, black beans, canned diced tomatoes, frozen corn, and seasonings) in a casserole dish and dot spoonfuls of cornbread batter on the top.  But last time I tried pressing the cornbread dough into my cast iron pan to make a crust, and filled it up with chili, and that was great too.  I put some cheese on top too.  Cheese isn't cheap but it has this way of silencing any objections anyone might offer and magically ferrying the food into their mouths.  Can't put a price on no whining at the table.

I just do chicken, cumin, lime juice, onions, and peppers.  John can have a corn tortilla while the rest have wheat and everyone's reasonably happy.   Especially if there's sour cream.

I chop chicken breasts in small pieces, dip them in egg, and roll them in gluten-free flour or corn flour.  Some seasonings in there are nice, though I can't tell you what exactly I throw in there.  Adobo mostly.  I would like to pretend that I use adobo to introduce the kids to their Dominican heritage rather than because it's all in one shaker and tastes okay.  There is always some leftover breading, so I put it in the freezer for next time.  I wish I could make them in the oven and have them taste as good, but let's get real: the only reason anyone even likes chicken nuggets is because they are fried.  That, and because you are allowed to use your hands and dip them in ketchup.  Marko really struggles with a fork and everyone loves ketchup.  I like to serve them alongside oven-roasted potatoes.  French fries would be better but I'm not up for frying TWO things for one dinner.

I brown up some ground sausage (the Aldi kind tastes of sage I think?) and onions in my giant skillet.  Then I mix in some frozen peas or spinach.  I layer some potato slices on top and pour in about a cup and a half of milk, with 3 Tbs of cornstarch mixed in along with salt, pepper, and garlic powder.  Then it goes in the oven for 20-30 minutes, until the potatoes are cooked and the sauce has thickened.  In a hurry, you can boil the potatoes in a pot and layer them on after they're cooked, in which case you can thicken the sauce on the stove.  But it isn't quite as good.

I roll some chicken pieces in gluten-free flour, panfry, and serve with rice, broccoli, and sweet-and-sour sauce.

I had this complicated way of making ranch gravy, but it turns out all the children really want is for chicken to be cut into manageable pieces and served with with ranch alongside.  Typical sides are mashed potatoes and sliced cucumbers.

My kids have not yet discerned the difference between ground turkey and ground beef.  (The difference is one whole dollar per pound.)  I also find it needs a bit more seasoning than beef.  To make meatloaf and meatballs without breadcrumbs, I use mashed potato flakes.  I don't rehydrate them (or else I get clumps of mashed potato) but I sometimes make the meat more liquidy by thoroughly mixing in some milk before sprinkling in the flakes.  I also include an egg.  I've tried lots of recipes and this is what holds together best and doesn't taste bad.

The above are the winners, of the stuff I've tried.  None of the crockpot meals I've tried have been any good.  And the stuff I most commonly make -- deconstructed hamburgers, chicken and rice with various seasonings (soy sauce, curry, or adobo), and bolognese sauce over rice or gluten-free pasta -- is too boring to even describe.  The kids are bored, I'm bored, John is never bored but he's not keen either.  So that's why I've been doing more "fancy stuff" lately.  Sometimes John even pitches in.  He made a good goulash the other day.  Another time he made twice-baked potatoes, and they were delicious but a bit too hard for the kids to eat.

This post is brought to you courtesy of my new tablet keyboard, and inspired by Simcha Fisher's "What's For Supper?" posts.  Simcha is a more adventurous cook than I am, but in fairness, her family has no allergies and doesn't seem too daunted by spices.  I feel like I do pretty well with what I have to work with!
Posted by Sheila at 2:16 PM

Yep. In brief, it's the meddling kids.