So it's been 100 days that Jackie has been in our lives.  I would argue Jackie has accomplished more in her first 100 days than another person who shall remain nameless, who started his job on the same day.

I mean, when she started out, she was the worst.  Trouble latching.  Wouldn't sleep for beans.  Always gassy.  Always fussy.  And if you even sneezed near her, she'd start to scream like an air-raid siren.  It was tough; I posted about this so I wouldn't forget.  And I might have, because it honestly feels like a bad dream.  A bad dream where I never got to brush my hair or change my clothes or go to the bathroom unless I had another adult around to hold the baby.  And even then I had to do it at a run, because she'd last maybe two minutes with John before starting to cry.  Meanwhile, despite being quite alert, she didn't really look at you, but would stare fixedly over your shoulder while you tried to get her attention.

I'm not saying she's easy now.  But she has made a ton of progress.  She is fairly good at nursing, as evidenced by the fact that she will tank up with a good feed and then not want another one for some time.  She sleeps a big chunk at night usually.  Her naps average about forty-five minutes instead of ten.  She can be put down for quite awhile in her bouncy seat or on a blanket.  She smiles.  She laughs.  She doesn't do peekaboo yet, but she likes it if you get in her face and make faces or talk.  She doesn't stare you down like many babies do, but she does make some eye contact.

She's gone from this skeptical grumpface: 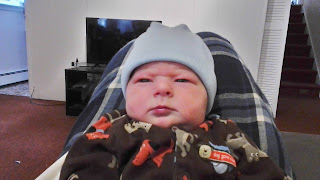 to this face that's actually happy to see you: 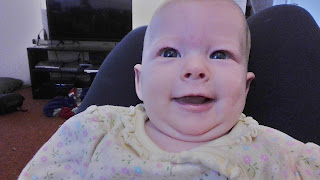 So that's good.  Certainly makes it easier to do all the work it takes to care for a baby when they appear to like you.

She's now rolling over from front to back, and getting herself quite turned around in her crib at night.  She can get her hands in her mouth, bat at toys, and kick a lot more methodically instead of just flailing at random.  She can now handle the grocery store without having to be nursed halfway through the aisles.  (I generally have to nurse her after bagging, but that's less difficult.)

Of course more abilities mean more problems.  She wakes herself up rolling over sometimes.  She has outgrown the sling but hates the mei tai.  She's drooling and gnawing on things, meaning her teeth are probably starting to bug her although they likely won't break through for months.  But, like money, age brings fewer problems than it takes away.

And I'm proud to report that I now actively like her!  I feel like I've got something of a bond going with this small demanding person, and I play with her sometimes when I don't have to.  A lot of faking-it-till-I-made-it went into that, but it worked so I don't feel bad about that.

I definitely feel completely recovered from the birth and have more energy than I had at least during third trimester, perhaps longer.  Of course I have more to do, so I'm still tired all the time, but I definitely prefer "tired after having accomplished something" to "tired after accomplishing nothing."  I think Jackie being a baby who actually sleeps at night is a big factor there.  Miriam was so awful at night.  In fact she still is, but John gets up with her.  So he's the zombie and I'm functional.  Ah well.

Still haven't lost much weight.  I don't understand how that can be, with all the running up and down stairs and walking to school for this or that, but oh well to that too.  Nine months on, nine months off.

Babies get easier as they get older, but it's very much two very slow steps forward and one rapid step back, so you don't really notice.  But I'm going to go out there and call these 100 days a success.  Things were easier at two weeks than they were at birth, and easier still at six weeks, and easier now at three months.  She's not a newborn any more, she's a standard Baby, and I know what to do with those.

The first 100 days went well; now here's to the rest of a successful first term!
Posted by Sheila at 1:16 PM

Email ThisBlogThis!Share to TwitterShare to FacebookShare to Pinterest
Labels: Jackie