What are the odds that our washing machine would break and we would run out of heating oil in the same week ... TWICE?

Actually pretty good, if both have the same cause.

You may remember that our washer started smoking and our friends gave us a new one, which leaked at first but after some tinkering stopped leaking.  Well, the other day we went to wash some clothes in this new, not-broken washer ... and it started smoking.

After some thought, and differential diagnosis, we realized that the commonality between those two events was that it was bitterly cold both times.  Our washing machine is in an unheated, poorly insulated addition .... most likely some water had frozen inside its innards and stopped the whole thing from working.  The motor or pump or something was burning out trying to move water that was actually ice.

That makes me feel particularly terrible, because it means it's our fault for running it in low temperatures, and we must be dumb not to have thought of this (I mean, the water did run in okay!), and surely after the first time we should have figured this out!

On the other hand, it means that all we have to do is wait for it to get warm and then try it to see if whatever damage we did to it is reversible.

However, the forecast is NOT promising.  Perhaps we will be able to wash clothes again in March.  Certainly I'm not buying a new washer to put in our below-freezing laundry room so I can ruin that one too!

Unfortunately when I told the kids "the washer doesn't work" they seem to have heard me say "potty training is for chumps, poop in EVERYTHING."  So I am washing a lot of clothes in a bucket.

A couple days after this I woke up to icy temperatures at four in the morning.  I worried the furnace must be broken, because no way could we have run out of oil already, but nope, we really did blow through 100 gallons of oil in a month. It's been COLD.

We called the oil company and they were miffed at us.  I guess a lot of people must be running out of oil at the same time.  It was Wednesday and they said they hoped they could get to us by the end of the week.  Yes, despite the forecast for four degrees overnight!  They figured we and our small children could just hang on till Friday.  They recommended we go buy some diesel and stick that in there.

The kids and I suffered through the day (how sacrificial!) and after work John went and got some diesel, so we were all right.  The oil truck finally came Thursday evening, to much rejoicing and gratitude.

Only the heat failed to turn on after that.  Apparently diesel and heating fuel are different enough that the furnace had to be reset.  John was out all evening at a political thing, so imagine me running around feeding dinner to the kids, getting them ready for bed, and periodically putting my foot on the heat register to see if it was blowing .... and finding it wasn't.  I check the thermostat .... 65 degrees, it really should be kicking in by now ... 62 degrees, isn't this fast for the temperature to be dropping?  The windows are rattling and it seems like that wind is blowing right in, so I resolve I'm not going to wait for John, I'm going to go down cellar and see if it's just a button I can push or something.

It was COLD out there.  I mean, WOW.  Wind just tearing through.  Our cellar entrance is outside, so I go through Marko's room, through the laundry room, outside, down the icy stairs, open the giant wooden cover, go down more stairs, unlock the cellar in the pitch black darkness, flick on the light, and start inspecting the furnace.  I have been told it has a reset button, but I don't see one.  Look on all sides, no button.  Cuss a bit to myself.  (This is me we're talking about, so I think I said "frick.")  I hear the kids crying upstairs so I go back up.

I try calling John, but get no answer, try texting, put kids into pajamas.  I stick the kids in front of a movie, give Miriam a toy, and go back down.  Still not finding a button.  Come back up to the phone ringing -- John calling me back.  He says there is a handle on the back of the furnace, pull it and the cover comes off, under that there is a red button, push and hold for three seconds.  I can do that.

I go back down, get under the cover, and there isn't just a button, but a whole array of stuff.  Since it's dark back there, I can't see anything red.  Just a bunch of shapes.  I just push on all of them, finally I find the dang button.  I push it and hold to a count of six just to be sure, and the furnace kicks in!  Hooray!  I close everything up, lock it, come inside ... and dangnabbit if that furnace hasn't somehow died or turned off or something!  Because what it is not doing, is blowing.

Too late to go back down, Miriam is wailing and she really has to be put to bed.  I put her to bed, she wakes up instantly because the bedroom is freezing. That means I have to handle Michael's bedtime (which consists of manhandling Michael into the bedroom and staying there until he's asleep) with Miriam in my arms. Not my favorite, but soon they are both asleep and I manage to put Miriam down this time.  Then I get Marko into bed, which requires a lot of whispered bargaining about how many stuffed animals he gets and how big a crack the door is left open.  I put on some fuzzy socks and start making myself hot chocolate because I am FREEZING, when John finally comes home.

He goes down to the cellar, pushes the button, it starts up and dies just like before.  But when he does that a couple more times, it finally works.  Apparently sometimes it has to be restarted multiple times.  I guess at least next time I will know what to do!

Despite my utter failure in getting the heat back on, I'm a little proud of myself for even braving our cellar.  It is a cold, dark, and scary place where there totally might be spiders.

Today I am sitting with my feet on the heat register whispering, "I promise I will never take you for granted again!"

Because, seriously, one might be tempted not to be grateful for our modern conveniences, but when you have to be without them, you learn just how dependent you are.  Still.  Our dream house will have a wood stove AND backup electric heat.  Imagine Scarlett O'Hara saying "I will never be cold again!"

The funny thing is, I'm dealing with all this nonsense, and it's just not getting to me.  On Wednesday I was curled around a hot brick, wrapped in a blanket, and periodically getting up to agitate my bucket laundry load, and all I could think was "on the bright side, I'm exempt from fasting!"

But really, the kids have been great lately and Miriam continues to take actual naps (if not always as long as I'd like) and so I don't feel I have anything to complain about.  I would much rather wash laundry in the bathtub than have two children screaming to be on my lap at once.  The one is just hard work; the other is emotionally distressing, to say nothing of the sensory overload.  And you can brag about all the laundry you did, whereas it doesn't sound impressive to say "I accomplished nothing today because I was holding a cranky baby."  Even though it actually is exhausting.

Miriam is crawling now.  Have I told you that?  Last week she was hunching herself up onto her knees and then lunging forward.  Now she is army crawling.  It sort of depends on what she is wearing though.  Nudity works best, but in this weather, on our hardwood floor, I'm mostly keeping her in pajamas.

And she is fast.  I am already having to drag her away from Marko's paper when he's drawing on the floor.  Yesterday one of the kids left a bowl of sauerkraut on the floor and she grabbed it and started stuffing her face.  I am not sure whether she managed to swallow any or not.  (Can you say third child?)

That wouldn't be her first food, though, because we gave her green beans a couple of days ago.  She just looked so jealous of us, and she is about six months now.  I thought she'd never be able to get them in her mouth, let alone swallow any, but I think she did.

Really I should give some thought to what I want to introduce instead of randomly grabbing vegetables off our plates and giving them to her.  Probably egg yolk would be good.  My "parakeets" produce some really deep orange ones, so they must be healthier than store eggs.

Because if I don't give any thought to it, odds are good she's just going to trail along behind the boys, hoovering up animal cracker bits and apple cores.  Poor neglected baby.

Marko's doodle of the other day.  He asked me to spell "weeping angel." 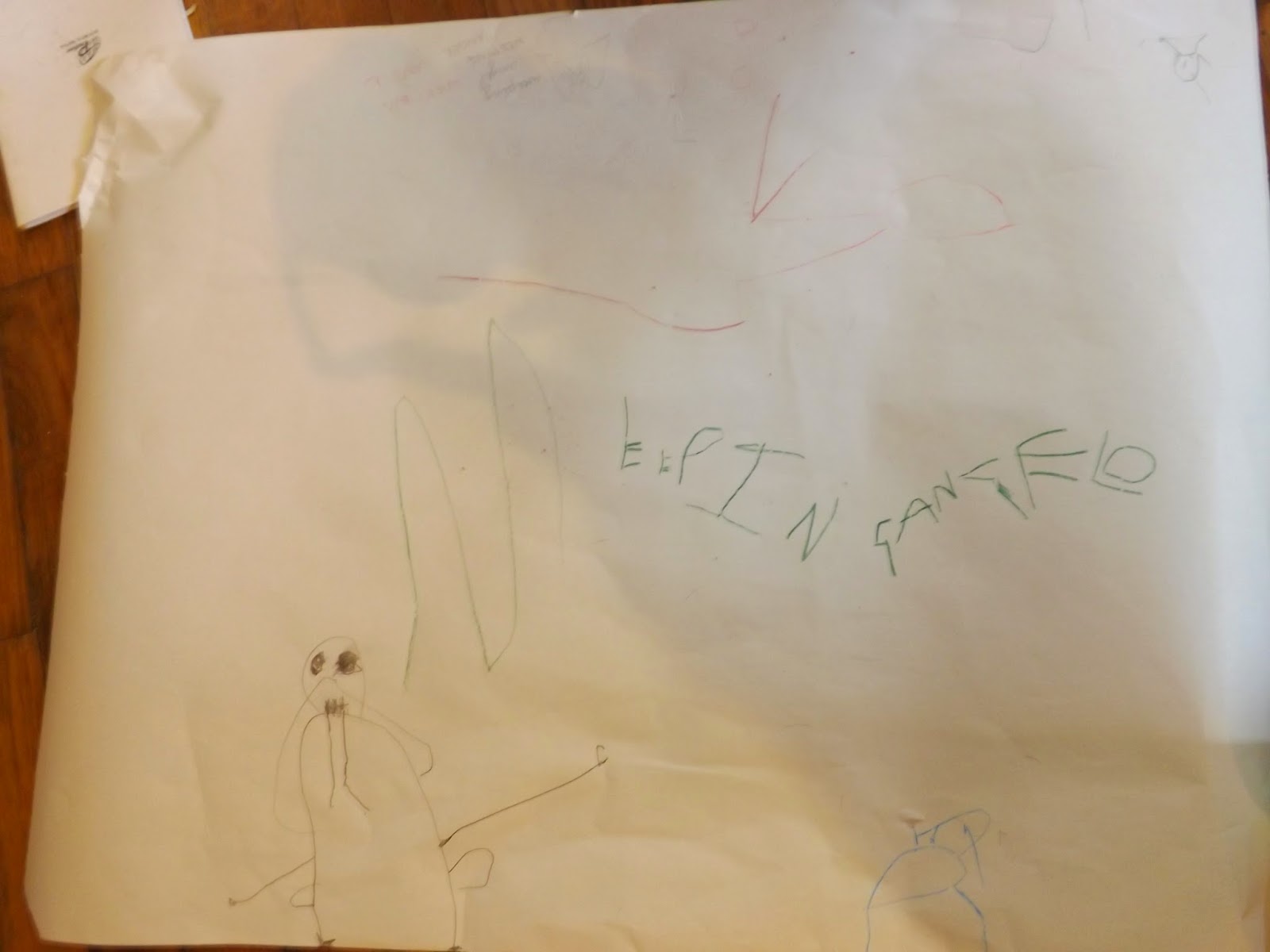 What he wound up writing: MEEPING ANGELO.

You can see our friend Meeping Angelo in the bottom left, with big dark eyes and his hands over his face.

Michael and I have reached a compromise about nursing.  He only nurses once a day.  Once he's nursed once he can't nurse again till the next day.  So the instant he sees my face in the morning he starts demanding it.  If I want a glass of water first, or to go potty, there's all sorts of fuss.

The other day he was nursing, and started to hum ... I recognized the theme for the Daleks.

Pro tip: when your kid is able to hum, in tune, movie themes while nursing, it might be time to stop.

Then again, it was probably time to stop last freaking year.  Oh well.  Once a day costs me very little and it's apparently very important to him.  I wonder if I would have any luck telling him that three-year-olds don't nurse so he has to stop on his birthday?

No matter how I wean him in the end, it's going to take a lot of tears, I suspect.
Posted by Sheila at 3:40 PM

"Because if I don't give any thought to it, odds are good she's just going to trail along behind the boys, hoovering up animal cracker bits and apple cores."

I am pretty sure most 6-month-old babies would consider that pretty much an optimal state of life. :)

Yeah, she's pretty happy with it. Ever since she learned to crawl she's much more content to be put down. She can get into stuff! She can collect fuzz and reveal the lousiness of my housekeeping! She can find that lego that the kids dropped last month!

(I declared that tiny legos are retired until she learns not to put stuff in her mouth a month ago. And I am STILL finding them on the floor.)

That is rather upsetting. Nothing really rankles more than your heating oil running out at a very inopportune time, and in your case twice. I think that you should have your furnace checked, so as to make sure that things are truly running properly on that end. Anyway, I hope that everything has been resolved by now and that you aren't experiencing any problems with your furnace. Thanks for sharing that! All the best!