We just got back from Seattle -- visiting my family, who are now thoroughly settled in back in America.

Traveling with two little kids is no joke!  But let me tell you, it is a heck of a lot easier going with two parents, an almost-four-year-old, and an almost-two-year-old, than it was last time with one parent, a two-year-old, and a newborn.  Michael napped a lot on the planes, which was good, because every moment he wasn't sleeping he was climbing all over me, trying to open and shut the window and push the call button and kick the seat ahead of us.

Incidentally, it seems to be part of toddler nature that they just have to stretch their legs on a plane by pushing them into the seat ahead of them.  Yes, it's rude to the person sitting in that seat.  But on the other hand, if you try to stop them, they scream and disturb everyone on the plane, instead of just the one person in front of them.  "The needs of the many outweigh the needs of the few" suggests that we should just let toddlers kick if they want to.

But I didn't do that, because I didn't want to be glared at.  So there was some screaming.

We had some nice weather and then a lot of cold drizzle.  It was a break from ice and snow, anyway.  And my parents' house, unlike my house, was both big enough and novel enough that the kids weren't bored staying inside.

The kids' uncles and aunt are 12, 9, 7, and 5.  That made for a lot of fun games, especially with the youngest (Charles) who is only eighteen months older than Marko.  They pretty much just played all week.  They played jumping-off-the-swing Olympics, captains and lieutenants on a ship (the uncles were pleased that Marko didn't insist on being captain, but his aunt objected to his choosing the name "Martha"), trucks, cars, chase, puzzles, books.  There was just no end to the fun.  The big kids had off homeschool for the week, but I didn't notice anyone being bored for a moment. 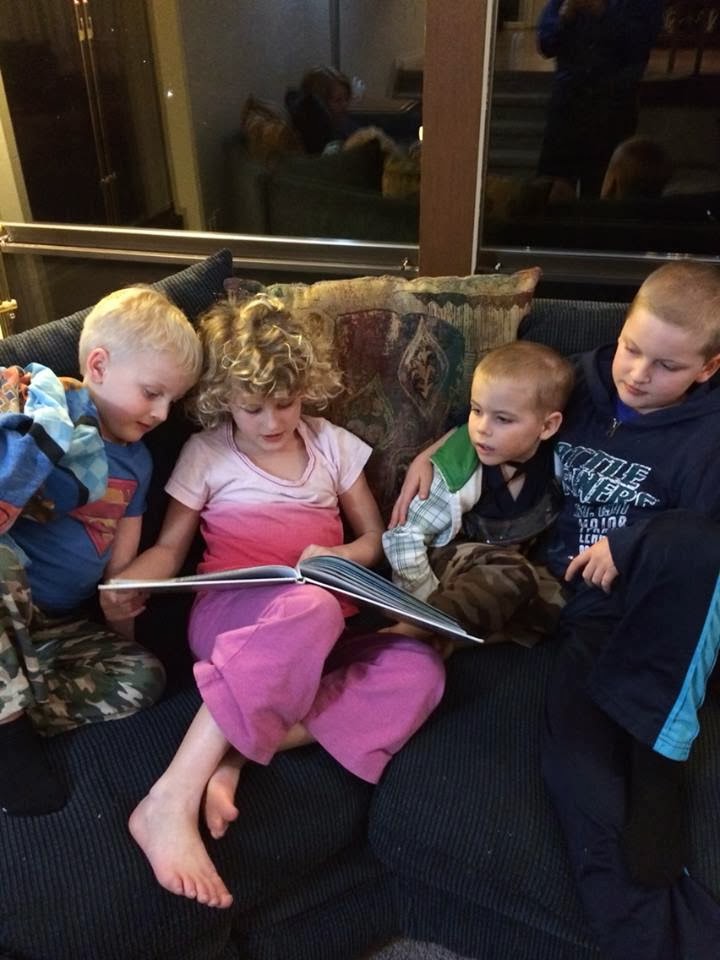 It made me really look forward to having kids a bit older.  I remember these kids being a ton of trouble when they were smaller (actually, that is something of an understatement; my family members are ALL intense), but this time they played together delightfully and the grownups had long, uninterrupted conversations!  My mom could run to the store with one kid and leave the rest at home!  Some of the kids could make their own food!

I know that older kids have their own challenges .... but boy, do I dream of a day when every member of the family uses the potty and sleeps through the night.  Maybe I will be fifty by then.  But by golly, it'll happen someday.

As usual when traveling, at least one kid (this time, Michael) was much too clingy for me to do what the grandparents always imagine and jet off on dates and naps while they watch the kids.  Sometimes John watched Michael while I did things, but he pretty much cried whenever he was without me, so I didn't do that much.  The first few days Michael nursed about every half hour.  I think it was his way of assuring himself that I was still there and he didn't have to be scared.  He certainly was happy to play with everyone as long as I was right there and he was getting nursing whenever he wanted.

But all the same, it was restful.  I didn't do much housework or cooking, and sometimes I napped when Michael did.  (Nights, with jetlag and all, were bad enough that we reinstituted naps.)  So when I got back yesterday, I was raring to go.  Really the only thing unpleasant about housework is the constancy of it, so having had a break, I didn't mind doing it again.

Well, yesterday I didn't.  Today I'm blogging to put off doing the dishes.  But I'll do them, never fear.

The trip back was rougher than the trip out.  It was Ash Wednesday, so we had to try to find meatless, gluten-free food during our brief time in each airport and then fit it in with the schedule of two-snacks-and-one-meal.  I would not recommend this to anyone.  Traveling is rough enough without being hangry.

Then we got back to our car and discovered the tire was flat.  The spare got us as far as a tire place, so we could replace the missing tire before going home.  But after that both kids screamed the remaining 45 minutes of the trip .... Marko, because he had been enjoying the adventure (though he was clearly tired) and wanted to go back to the airport and ride the escalators and never go home; Michael, because he was tired and didn't want to be buckled and we wouldn't let him nap for fear he would be up late.  Which he was anyway.

We got up that morning at 3:30 a.m. Pacific Time, and finally crashed in our own bed at 11 pm Eastern Time.

But oh, the sweetness of one's own bed.  There is nothing in the whole world like that.  I think I may never leave again.


How was your week?

More quick takes at Conversion Diary.
Posted by Sheila at 10:08 AM

This post reminds me of how much I love it when the extended family can come together--something that happens less and less often now that the "grandchildren" are all grown up. There's nothing like being around people who all have the same noses! ;-) And shared memories are so nice, too!

But as wonderful as these reunions are, there really is nothing that beats sleeping in your own bed. That's a whole other sense of coming home!