Exploring on the city bus 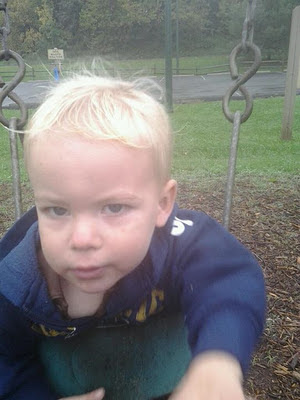 I have been stranded at home on weekdays pretty much all summer long. One day, I was at the park two blocks from my house when I saw a bus go by. What? We have a bus?!

A bit of research informed me that this bus goes all over town, stops a block from me every hour, and costs fifty cents a ride. Well, sign me up!

I got the chance to try it on the second straight day of rain last week. Marko was as stir-crazy as could be, and I wasn't much better, so I resolved that we would leave as soon as possible. Our destination was the library. Hours of fun to be had there, though I planned to only stay an hour so we could have a snack before naptime. Once I mentioned the words "bus" and "library" to Marko, we were committed. We dashed around the house like mad, getting ready so we could catch the 8:37 bus.

The bus came right on time, and the driver was unbelievably friendly. He offered to swing right by the door of the library to drop me off so I wouldn't get rained on, and even asked when I'd be done so he could come by the door then, too! It was only a moment after he pulled away that I saw the sign on the library: Open 10-8. It was 8:45. And it was raining. Dang it.

So we played around the library in the drizzle for awhile. It wasn't raining hard, and it wasn't cold. Marko splashed in all the puddles with his bare feet. I had wanted to bring his shoes, but couldn't find them because the dog had made off with one, like ... two weeks ago. We're still not doing shoes that often. But it wasn't cold, like I said, and Marko seemed content and not cold, so I didn't worry.

Until a librarian came out and told me off. She said she "had concerns" about my son's bare feet and was worried he would get cold. "Thanks," I said, "he's really fine." (I deal with this EVERY TIME we go out in public. If he hasn't got shoes, I hear about it!) "No, I'm really concerned," she said. "He's going to be cold, playing out there in the rain with no shoes!"

I said I wasn't sure what I could do to alleviate her concerns, as I didn't have any shoes with me. I hadn't planned to be out there in the rain, but I'd taken the bus and not known when the library opened. Then I had an idea. "I mean, you could let us inside, and then he wouldn't be cold!" (The library has a large open area outside of the part where the books are ... so we wouldn't be hurting anything.)

Of course she turned this idea down, gave me a long, disapproving stare, and went inside. I was ticked. So I did what I always do: came up with a million and one comebacks cleverer than the one I had used -- all of which would be inadvisable to use in real life. Like this one: "Who do you think cares about keeping him warm more, his mother or a random stranger?" Or this one, "My husband works for you for FREE every weekend, and this is what I get from you." Or this one, "I'm assuming you're mentioning it because you happen to have rubber boots in size 18 months in your pocket?"

Thank goodness the lady was gone, though, so I did not embarrass myself with any of these rude remarks. Instead we went to the playground next door and played for awhile. Marko rode on the swing (his first ever! he hated it) and climbed the jungle gym. I stood there and got wet. The rainwater quickly soaked into my shoes, so that I ended up with cold, wet feet until lunchtime ... whereas the rain dried right off of Marko's feet every time I picked him up and felt them! (Every time I get criticism about his lack of shoes, I feel his feet obsessively to make sure they're not cold. They never are. This kid is warm-blooded like his dad.)

When it was almost ten, I went and stood outside the library. Apparently that is the happening place to be! There were half a dozen people waiting. I ended up telling a college-aged kid about the shoe thing, and pretty soon everyone was laughing about it. The kid kept joking, "That's like seeing a homeless guy and saying, 'I'm worried that you're so hungry' and then walking away! That's like seeing someone freezing to death and saying, 'Gee, you look cold! You should have a nice warm coat like the two I'm wearing!'" An older lady told me that she's only just started wearing shoes again after the summer ... flipflops are the most she wears all summer long! Everyone was very nice. I couldn't help but wonder if social class had something to do with it -- most people in our town are fairly poor and blue-collar, whereas the librarian looked and sounded much more "posh." John says this is true -- shoes can be a sign of social class, so we are looked down on as "poor" or "backwoods" for keeping our son barefoot.

Sigh. I thought one wore or didn't wear shoes based on whether one's feet were cold and whether one liked wearing shoes. Go figure.

Anyway, we had a great time at the library, which has a great toddler area and a wide selection of books on natural childbirth. What more could anyone want? But within half an hour, we had to leave to make sure we wouldn't miss the bus.

The bus ride home was long. See, the route is in a big circle, so it takes five minutes to get to the library and fifty-five minutes to get home. If it hadn't been raining, and wasn't all uphill, I might have walked -- it would have been quicker. But we had a nice tour of the town. I had no idea there was so much right here in town!

Marko loved the whole experience. "Bus! Man! Driver! Bus! Woman! Bus! Seatbelt! Bus!" And the few other passengers were charmed with him. Again, they were fairly poor, and we traded stories of traveling around by bus and recommendations for dollar stores. I may be college-educated, but both my budget and my preferences seem to make me get along much better with the less-well-off, blue-collar inhabitants of this small town than I ever did with the much posher people closer in toward DC. Does that make me reverse-classist or something? Or maybe it's just that I like the real South, and the DC area doesn't really count.

Anyway, except for a little bus-sickness on my part on the way home, we had a great time. Marko fell asleep on my shoulder a little short of home, and the bus driver went off his route a bit so I wouldn't have to walk far carrying him. (He was so nice.) Definitely a great adventure for a rainy day!

Though, seriously. I would like to go out in public just once and not hear a comment about Marko's lack of shoes. Just once.
Posted by Sheila at 11:36 AM

How annoying! I think it would be completely acceptable to say in a really bright, excited voice, "Oh, great, I'm assuming you're mentioning it because you happen to have rubber boots in size 18 months in your pocket?" Ha, ha, ha. Sometimes people need to have their inanity pointed out to them.

If you lived in New Zealand, you would get next to no comments about his bare feet . . . because many Kiwis already walk around with no shoes!

One time, when I was walking to the library, the strap of one of my jandals snapped and rendered the shoe unwearable. After a few seconds of deliberation, I decided not to turn back and get another pair of footwear, but to proceed to the library with nothing on my feet! And none of the people I passed thought it was weird!

The only problem, as I found out later, was that my feet, used to the insides of my shoes or the tops of my jandals, got a bit scraped by the rough pavement I walked on. There was no discomfort during the walk to the library, and it was lovely to feel the library's carpet between my toes; but it was more of an ordeal to make the walk back on my suddenly sore soles. =P

It's just too bad that this practice isn't well known enough internationally for busybody strangers to be put off if you faked a Kiwi accent. (That librarian seems like the worst kind of busybody: all over your business, which she's sure you're doing wrong, but not willing to offer any practical help.)

I mean, obviously, had his feet been cold, he'd have made more noise about it himself. Right?

Don't even give such folks no never-mind!

People at church were pretty critical when Peter wasn't wearing shoes, too -- even though it was summer and he wasn't walking yet. Could be a class thing... we live in an area that is largely made up of people working their way into the middle class, so perhaps they feel more defensive about anything that suggests they haven't made it.

I hear that in Hawaii, barefoot is the way to go. They tried to mandate shoes in schools, and the kids protested by ALL coming barefoot! So there are no shoes required in Hawaiian schools. And in many African countries, everyone plays soccer or runs with no shoes, and they have fewer injuries than the first world players.

But in many parts of America, it is just not accepted to be barefoot ... no matter how hot it is, no matter how young the baby is, he is supposed to be wearing at least socks.

I suspect that even in Hawaii, shoes will mean something, if not the same arbitrarily important thing. But perhaps they have another trigger . . .

Over here, I wear jandals to Mass much of the time, as do many other women. (It's not so acceptable for men, though.) The thing is to wear obviously nice ones, the kind you'd also use at a party, and not just the rubber kind you'd havee on when cleaning out the garage. But it would be really hard to make a case against bare feet in church when we have a very old custom of taking our shoes off before entering an adoration chapel. (And if I tried hearing Mass in bare feet and someone called me out on it, I'll just bet that if I said, "I made a promise to God to do this for a year," they'd leave me alone!)

Not that this is much help when dealing with the busybodies. I'm just fascinated by how controversial shoes (or the lack thereof) can be!