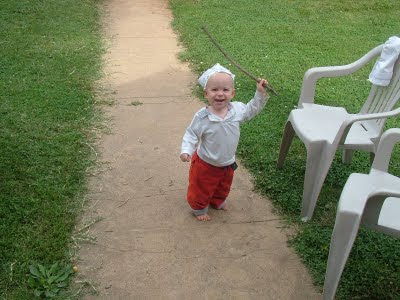 My kid is a pirate. With underwear on his head. And his shirt on backwards. Yeah, I'm that kind of mom.

I'm not one for following advice. When the gardening books said to double-dig my tomato beds, till in compost, and put bone meal in each hole, I just broke the sod and stuffed the tomatoes in. (With my second set of tomatoes, I added some old stock bones in the holes, but it doesn't seem to have made any difference.)

Here's a bit of advice I read about fall planting. "Fall planting is great," the books said, "but watch out that you don't get heat exhaustion doing all that digging in midsummer."

Oops. So I guess breaking sod at 2 pm on the summer solstice isn't what they meant? I wore long pants because of the mosquitoes, shoes and socks because of the shovel, and a dark shirt and my hair down because I am dumb. It reached 90 degrees that day and the humidity was high. After about 15 minutes, I had a bad headache and my stomach was upset. But I didn't feel hot, so I just kept going until about five minutes later the baby came out of his shady spot and started crying and being clingy. So I figured he was overheated and so I took him inside, where we put ice on our heads and guzzled water and ate salty pretzels.

Apparently that didn't do it, though, because by evening I felt way worse. Maybe it didn't help that I kept thinking it had cooled enough to go back to digging and then being driven inside 10 minutes later feeling yucky again.

I can say, though, that the bed in question is in a great spot! It is seriously NEVER in the shade!

By the time John was home and was kind enough to take over all the toddler duties (and the dinner duties, AND the dish duties -- what a guy) I was a mess. I took a shower to cool down but I still felt lousy. Right before bed I threw up. Blah.

Not quite sure if the heat did ALL that or just set it off, but I've learned my lesson. No gardening in the scorching sun. Not for non-heat-tolerant, northern-European-descended, Seattle-raised me. (P.S. For the record, I'm quite sure I'm not pregnant; we all know you're wondering.)

So here's how much I got done: 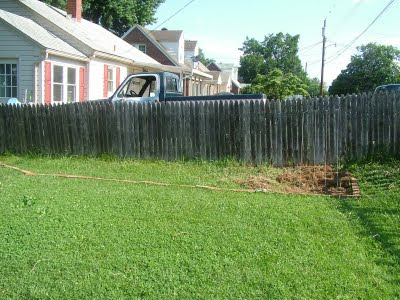 Not a whole lot. I planted eight green beans, two near each of those string trellises: 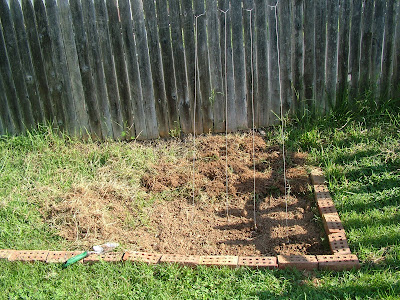 The string was a friend's idea. She said the beans won't be able to climb the fence itself (and I definitely agree). I decided to angle the string from the fence to the middle of the bed, because the ground right up against the fence is steep and filled with gravel from the neighbors' driveway.

In other news, I've got some help with the yard: 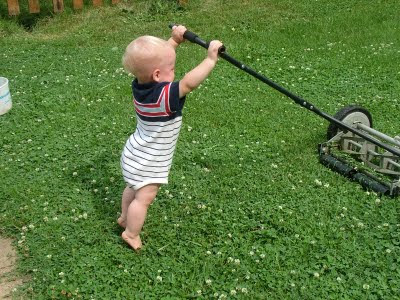 Or rather hindrance. I hope he's this in love with the mower when he's big enough to push it.

Poor guy took a faceplant on the sidewalk last night. He was holding a stick and wouldn't let go of it to catch himself, so he scraped his lip on the pavement! Daddy and I both kind of freaked when we saw the blood pouring from his mouth, but a popsicle quickly made it better. (This is our test: if it's not solved by a popsicle, then it's serious.) But the scrapes still remain: 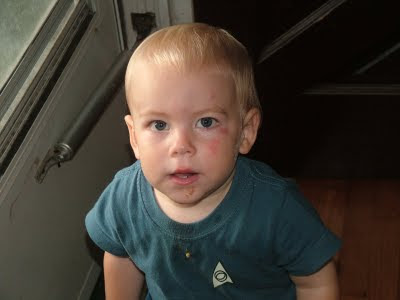 Poor thing. (Those aren't scrapes on his chin, though; they're muffin crumbs.)

You better not mess with Skid-Marks Marko. 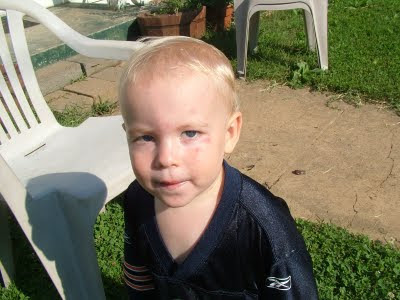 I've got some oregano sprouting in a container. Somehow direct-seeding hasn't worked for me so far, so I took the safe course. But the container's outside, because it's much warmer and brighter out there than in here. I also planted some thyme the other day, but it's not up yet. 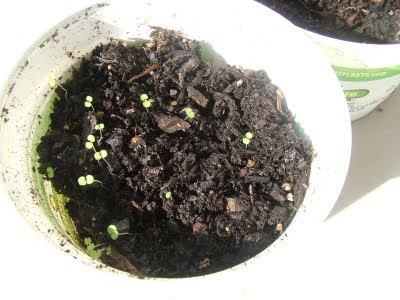 My beefsteak tomatoes have some yellow and brown patches a few of on the lower leaves. I'm not 100% sure but my gardening book says it might be verticillium wilt. So I turned to "what to do" and got, not in so many words, "Guess ya shoulda planted resistant varieties, sucker!" So, it may be too late for the beefsteaks. However, the Cherokee Purples seem unaffected, and those were the ones I want to do next year anyway. 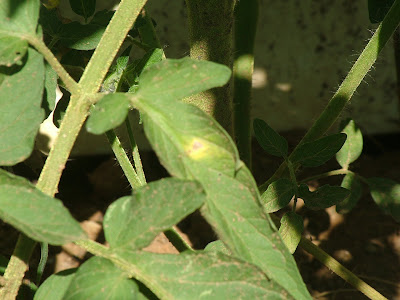 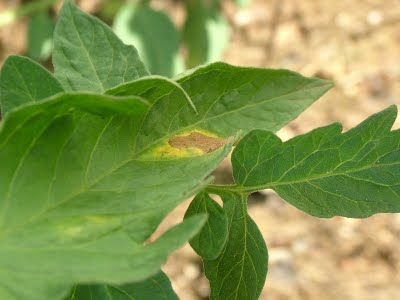 And a last, unrelated topic -- sewing. Lately (that is, in the past several months), I've done two sewing projects. First, I turned my favorite pair of jeans into a skirt, because they had a hole in the knee. 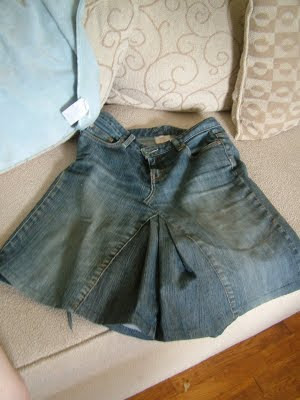 It's very simple to do this: just rip out the inseam and a bit of the fly seam (so you can overlap it) and stitch in a triangle from the bottom part of the legs. In my case, I used the whole rectangle from the lower legs and pleated it on the top to make it fit -- I wanted a really loose skirt that was good for gardening.

And then there was this, the other day. I call it the Hair-Pull Horse. It was an attempt to give the baby something to pull on besides my hair. 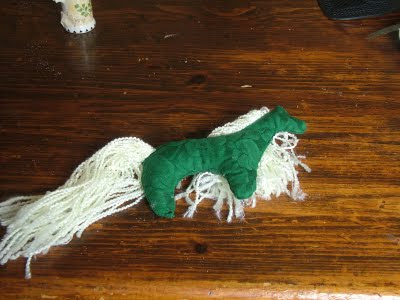 As such, it's a total failure. He is undeterred in pursuit of my hair. He has a serious obsession with the stuff. But he does like playing with the horse and shaking it by its tail, so I guess that's something.

Now, to wait for my green beans to pop up! Actually, two have already ... I'm so excited. Watching plants grow just thrills me to pieces. I can't believe I had to wait till I was 25 to realize I love gardening.
Posted by Sheila at 11:11 AM

In the second pic of Mark he looks like he's saying... "Yeah? Don't look at me in that tone of voice. Are ya gonna cooperate or am I gonna haveta Muss ya up?"

Oh, and no gardening in the sun. Not good. But good luck with the beans and such. It is fun to watch stuff grow.

Great lawnmower picture! And I will stash the popsicle test away for future reference as an indication of serious injury. :-)

Yay greenbeans! But no more heatstroke for you....

Your comment about having to get to 25 to realize you love gardening struck a nerve. My mom and I were talking the other day and she complained that no one seemed to care about her garden when we were kids. I told her that I had great memories of eating vegetables from her garden, but I couldn't deny that I was a pill when it came to helping out with watering or weeding. I didn't like getting sunburned and I was scared of bees. But now I can't wait to have a house and a garden of my own. I think you can only really enjoy gardening when you are the master (well, mistress) of your plot of land. Otherwise you feel a bit like a migrant worker!

I just wasn't really exposed to gardening much as a kid. My grandparents did it, and I thought it was awesome, but I never really had a chance to WORK in the garden much. I enjoyed the produce, but I was sure it was something impossibly difficult that I'd never be able to do. My mom and I always used to joke that we had "black thumbs" because we always killed the houseplants. But it turns out growing veggies outside really isn't that hard!