August 5th is a hard day for my husband. Eight years ago today, he lost his father to cancer. He was only 16 years old. Every year on this day, he gets really quiet and uncommunicative and melancholy, and I often feel confused because I don't notice the day. When I see a calendar, I understand. The funny thing is that in August of 2002, I was getting kicked out of boarding school. I know it doesn't compare really, but it's interesting to think that even though we didn't know each other, we were both going through the hardest time of our lives.

Last year, on August 5th, nothing particular was going on. John was working and I wasn't yet, so I didn't really have much to do. When he came home from work, he said, "Hey, you should test and see if you're pregnant!" (I had bought the tests a week before, "just in case.")

"Nah," I said, "I'm probably not pregnant, it's too soon to test, and there's no reason to think I might be pregnant."

He sighed. "Okay," he said, and went on with what he was doing. He looked melancholy.

Then I realized what day it was. So I decided he could have his way.

Five minutes later, I walked into the living room in some agitation, trying to keep from letting on. "It's supposed to sit for five minutes, but you can go in and look at it now if you want." I had already looked at it, but didn't want to "jump to conclusions" since I hadn't waited for the five minutes yet.

John gave me a funny look, probably because my face was switching back and forth between chalky white and scarlet red. But he got up, went into the bathroom, and looked at the test on the counter. Then he came back and started hugging me. We were going to have a baby.

"If it's a boy, we should name him Mark because of your dad," I said. (We had already decided on this a long time before, that the first boy would be named Mark.) 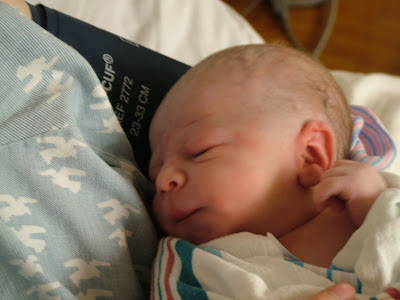 It was a boy, and I love him so much.

Mark Sr., I wish I could have known you. May you rest in peace. Mark Jr., I hope you grow up like your namesake, strong in your faith and your character.
Posted by Sheila at 9:21 AM

My love to you and John and Marko on this day. How beautiful that life isn't random; it's a novel.

Such a beautiful post, Sheila. I'm glad that for one year, at least, John had a happy day on this day. And every year after, you'll have the happy memory to sit with the sad one.

Also, I'm glad you remember him, too, even though you never met him. I know it's an 'of course!', but many people, I think, don't mark it, don't pay attention to those things. So hugs to you, too.

Meredith -- you're right, and just the way I would have written it had I been the Author! If, of course, I'd thought of an idea so clever.

Heather -- today has been way better than most years. There's more a thoughtful vibe hanging around than a sad one.

And what a novel! I see Dr. Thursday has recently been remarking on such things as well. And I'm particularly glad the Author wrote Himself into the tale, too...

This is such a lovely and poignant post. And a fitting tribute to your father-in-law.

I find the connection that our children give us to our predecessors to be amazing and strong. They're an ever-present reminder that life is not about us, it's about something much, much bigger. We are only one small part of it.

I wonder if Heather noticed she said, "many people, I think, don't mark it," So, God has marked the day with Mark. Every year there will be one sad thing to mark the day, and another happy memory to Mark the day.
You lover of puns, you!