My first venison stew -- and my first cooking photoblog

So I am always reading these cooking blogs where they catalog every step of their recipe with gorgeous photos that have you drooling and trying to eat the screen. (Well, almost.) I thought I'd try it just for kicks, while making stew out of the delicious venison that Sean brought us last weekend.

My verdict? Too much work, trying to take pictures in the middle of cooking something, especially when you've got your hands all gunky with raw venison and have to keep washing them in order to take pictures. So I doubt I'll do it again, unless I get an assistant with enough time on his hands to photograph every stage for me. But it was kind of fun nonetheless.

First, a picture of the meat: 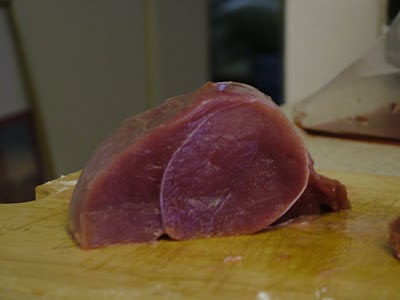 Doesn't it look good? Nice, dark red color; very little gristle. It even smelled good! (I've come a long way: it used to disgust me even to see someone else working with raw meat; now I like the smell.) I don't know how much of it I had; several pounds at least.

Then I cut it up into small pieces. 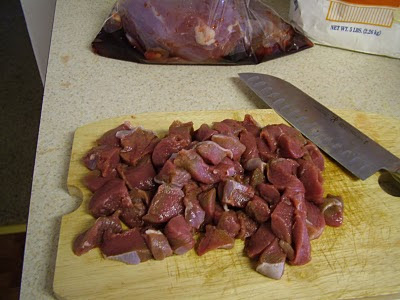 This knife made the work easy. If I were a professional blogger, I would tell you what brand it was, but I'm not and so I don't actually know. It was a wedding gift from my grandma, a more serious (and talented) cook than I will ever be.

Next I dredged the pieces in flour. This helps keep them absolutely dry, which is important when you're going to be browning meat. Now the flour itself isn't strictly necessary, but I think the browned flour adds a bit of color and thickness to the stew liquid, so I stuck with it. 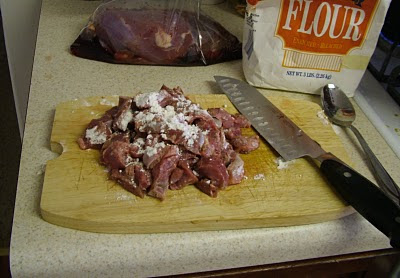 Then off they go into the pot for browning, a small batch at a time. The small batch is important, as they won't brown if they're crowded in the pan. The pan has to be hot, too -- I set my burner at about six out of ten. Then I drizzled a little olive oil into the pan before each batch, and browned the meat. 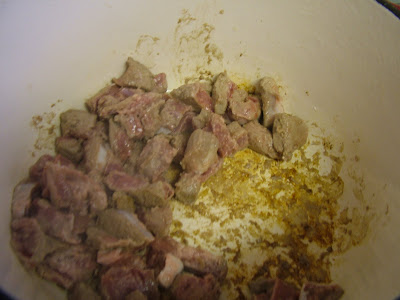 Oh, no, some bits are sticking to my pan! No, actually this is a good thing. Those browned bits are called the "fond," and end up giving flavor to the stew by the end. This is why I did my browning in the pot I was going to cook in instead of in a separate pan. Luckily I have an enameled cast-iron dutch oven (another wedding gift!) which is good for both browning and simmering the stew, and the "fond" doesn't stick too badly. By the time all the batches were browned, the bottom of the pan was completely covered with brown gunk and I was hoping hard that it wouldn't stick.

Meanwhile, the completed batches of meat sat in another pan. It's a good use for this pan, as it heats unevenly and everything in the world sticks to it. 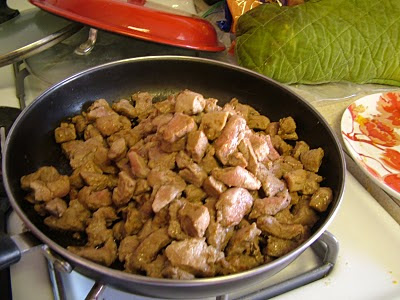 Mm, yummy browned meat! It's not good to eat yet, though -- only the outside of each piece is cooked, and I did leave some pink spots anyway. 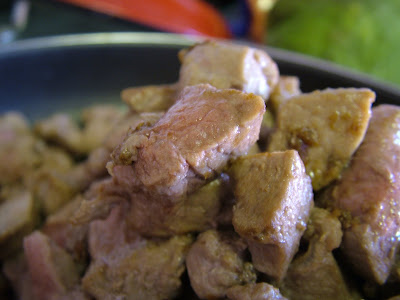 Looks good all the same, though!

Next for my onion, which I chopped as various batches were browning (necessitating more handwashing, as I switched among chopping meat, dredging meat, and chopping onions (also taking pictures and eating nachos -- I'm a multitasker) ). I used about an onion and a half, because I love onions. 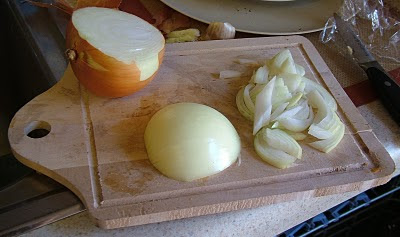 I threw the onions into the pot with the last batch of browned meat. 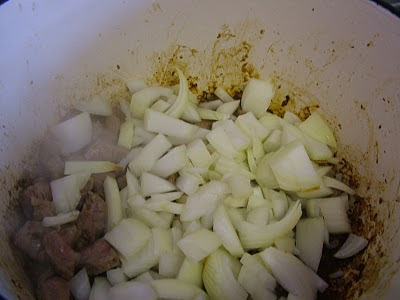 Once they were a little bit cooked, I dumped in all the browned meat. I added some water -- about a cup -- along with the juice from the bag of meat, and debated adding this wine: 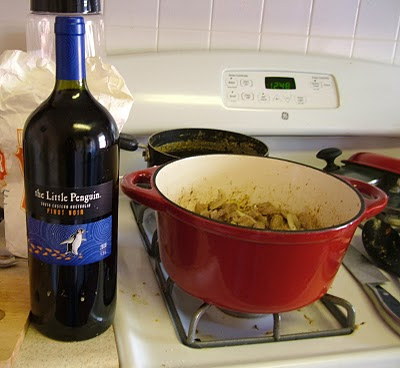 Was it worth opening a bottle just for this stew? I decided yes. (We were out of the Chianti which has stood me in such good stead for so many dinners.) Unfortunately John was disappointed that I'd opened it ... perhaps he was saving it for something. Moral of the story is, call your husband before getting into his good wine and using it for cooking.

But it did look and smell delicious going into the pot (the kind of delicious that makes me chant to myself "my baby is going to need his brain later" to keep myself from having a glass. I did, however, lick my fingers, and it was indeed quite good wine). It added a bit of color, which the stew was lacking a bit. Either I didn't brown the meat quite right (as I usually don't -- I've only really had success with this once when making beef stew) or venison is just a little lighter. The wine remedied this wonderfully: 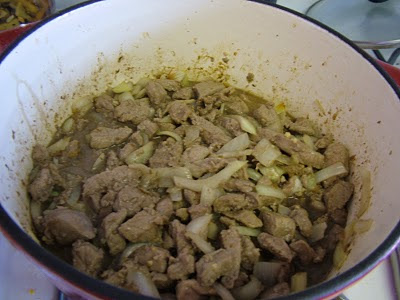 You see that, although the meat is kind of greyish, the broth is darker. That's the wine. Wine also has a tenderizing effect on meat. In fact, it is so essential to stew that I would hesitate to make stew without wine ever again. The difference is that huge.

With the liquids added and the stew looking like a stew, it was time to scrape a bit at the "fond" and see if it would come off. Amazingly, it did, even though I used a plastic spatula (the dutch oven warns not to use metal utensils as they will scrape the enamel off). And it definitely did add its color to the stew, so I hoped the taste was improved by it as well.

The last thing I added before putting on the lid was garlic. If I'd had fresh, I would have used it, but, as I didn't, this is a good substitute: 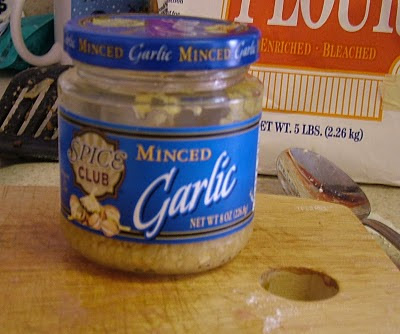 Much better than just garlic powder. I didn't add any other seasonings at this point, because I have heard that herbs like rosemary and thyme lose their flavor if you cook them too long. (As a result, I almost forgot to add them altogether. Oops!)
Then I put on the lid and let it bubble. 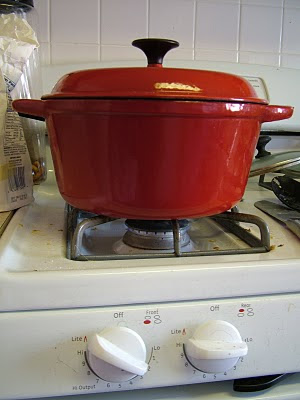 You see I've got it set to 2 on the stove, which is a slightly higher simmer. 1 occasionally fails to simmer at all, so I thought 2 would be better. After this I took a bath and (accidentally) a long nap. Oh well, good use of a Saturday!

I woke up to a delicious smell about two and a half hours later. My stew was ready: 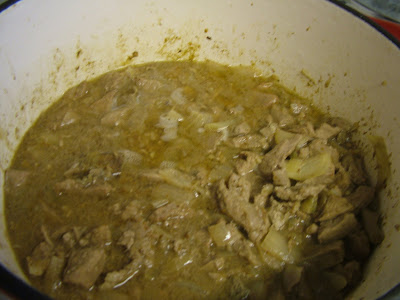 John got home about a half hour later, which was lucky, because I don't know how long I could have held myself off from starting in. Then he wanted to go to confession, so we both went, letting the stew get another half hour of simmering. (They do say the longer it simmers, the better!)

When we got back, I cooked up some macaroni to serve the stew over. Next time I serve it (because, believe me, this is not a one-dinner meal!) I'll probably do potatoes, but I like noodles better. I didn't thicken the sauce, as some people like to do, because I prefer it as-is. (If I had been going to thicken it, a flour-and-water paste would probably work fine. Just make sure to simmer that for awhile for it to actually take effect -- I have ruined a lot of things by continually adding more flour and water, thinking what I put in hadn't worked, and then having it congeal in the fridge later. Yuck.) 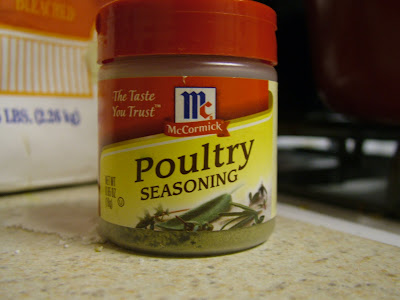 Then I served it over the macaroni and finally got to try some. 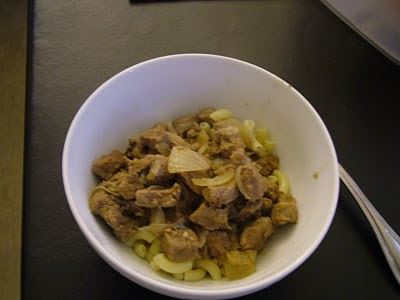 It was pretty good! John had three helpings. Hope he doesn't get tired of it, because we're having it tomorrow, too.

One note on the flavor, though: most venison recipes advertise that they take away "that gamey flavor" and that it "tastes just like beef." This one doesn't. It tastes like venison. So if you are cooking venison and don't like the gamey flavor, I would suggest marinating the meat beforehand. Apple cider vinegar is great for this. Do, however, remember to dry off the meat afterward if you intend to brown it.

You may notice that I didn't add any vegetables. This was mainly because I didn't have any, and secondarily on the thought that I might want to add different things to it on different days, since it made such a huge batch. My plan, once I get to the store, is to add mushrooms and carrots. I think those would do a lot for it. Especially the mushrooms ... yum.

So, this was fun to do, and good to eat, too. Don't my pictures look nice? I always thought those food bloggers did something special to make the food in their pictures look so yummy, but apparently not. I didn't even have trouble with lighting, as I cooked it in the middle of the day and had the blind open. Feel free to comment!

This is wonderful! =D I'd be very interested in any Foodie posts you might want to share in the future. If you could do a follow-up, with every variation of this stew (what you added or served with it for each day it lasted), that would be great, too!

We can't really get venison in the Philippines, though, so I suppose I'll be trying this with beef.

PS -- I think some Food 'bloggers "cheat" by using a tripod and putting a plastic bag over the camera so they don't have to wash their hands so often before taking a new picture. ;)

That looks very tasty Sheila! I'm definitely going to have to try this with some of the stuff I have lying around.

I definitely think it would have been better with mushrooms, so I suggest you put some in.

However, I'll never know, because I only ate one bowlful myself, the first night. The rest all ended up as John's lunches. Not quite what I intended, but I'm glad there was something in the house for him to eat when we ran out of bread and baloney!

Wow, venison! It looks delicious and just like I imagined it from reading Little House on the Prairie and all those Oregon Trail novels.

Is venison as filling and chewy as beef? Just wondering as I'm not likely to be eating any meat of my own volition anytime soon. =)

I just got sent your link because I'm looking for recipes for our first round of venison! This sounds tasty so I will have to come back and give it a try. Thanks.
God Bless.

Heather, venison is very much like beef, just leaner and a little stronger-tasting. However, I hear it is a great deal healthier, since venison is free-range (of course!). And, in my case, it was a lot cheaper, at the wonderful price of free, thanks to Sean.\

The main focus of this stew is the meat, so I doubt this recipe is likely to be of any use to you. However, I must say that everything I ever made combining red wine and mushrooms has been delicious, so including those elements in some other dish would probably be great.